“Every family is dysfunctional, whether you want to admit it or not.” commented one Hollywood actress. Politically incorrect, but the statement does hold water, albeit in a brutally honest way. Enter the life of Billy, a sweet deaf boy who returns home to his (dysfunctional and almost lethal) family in Tribes.

Award winning play, Tribes is Pangdemonium’s latest production and one of the few unique productions that reaches out to new audiences like the deaf community in Singapore. Christopher (Adrian Pang) is dad, a better critic and egoist than he is an academic. Beth (Susan Tordoff) is mom, a mystery novelist who’s writing a ‘marriage-breakdown mystery’ novel which runs many parallels with her own life. Daniel (Gavin Yap) is big brother with daddy issues and failed speech expert who resorts to living under his parents roof, while Ruth (Frances Lee) is sister, opera singer wannabe and one hot mess – she found solace in a boyfriend twice her age which fell short of the Tribe’s expectations of course. And we have Billy (Thomas Pang), a deaf boy who was raised up like the average ‘hearing’ person.

The play starts off with the Tribe seated around the dining table after dinner, an ordinary setting like that of every other average family – until the bickering began. In truth, sarcasm and arguments are a family tradition, making it hard to imagine how one stays sane in a family like this. You could even say that Billy’s handicap is a godsend, but that’s okay in this family because according to dad, “That’s how we show our love”. Attention finally falls on quiet Billy when he reveals that he met a girl in the form of hearing-girl-turning-deaf, Sylvia (Ethel Yap) but drama ensures when dad finds out that Sylvia has been teaching Billy Sign, introducing him to the deaf community and also hails from a deaf family herself.

The Tribe plays nice at dinner with Sylvia, but criticism rears its ugly head when dad grills Sylvia to accept that there are limitations in the vocabulary of the Sign Language – an allegory of the biased worldview against [being] deaf. Later, Billy finds restored confidence and comfort in fitting in with the deaf community, eventually deciding to stop speaking to his family altogether until they are willing to pick up Sign to communicate with him. 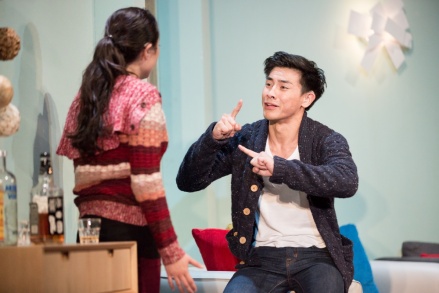 The family’s beliefs and loyalty for each other was also put to the test as Billy leaves the family, not before chastising his family – using only Sign Language – for ‘never’ paying attention to his needs. Wanting different things, both Billy and Sylvia have to confront their own issues on their own identity and self-worth.

Directed by Tracie Pang and written by Playwright Nina Raine, the two-hour play was huge in depth and ambitious in its endeavour to directly confront certain issues about the deaf community and on being one. To prepare for the play, all of the cast actors also picked up Sign Language, working closely with members of the deaf community to gain further understanding and insights into their lives.

Billy’s loneliness was apparent right from the first scene; he approaches both his brother and father asking each of them “Why are you upset?”, to which they both brushed him off. Being round the family table was like being in a circus show, but Billy could not have been any lonelier. Newcomer Thomas Pang (Billy) was simply brilliant in his acting to say the least, especially when he delivered an explosive Sign Language ‘monologue’ to address the white elephant in the room, “I am deaf!” That scene was undeniably the most intense, gripping and unforgettable scene in the play that had many memorable moments.

The reverse of Billy’s life, Sylvia’s character played out perfectly by Yap sheds much light into the unheard world of the deaf. Sylvia explains that Sign Language is a beautiful language because Signing requires one to invoke one’s entire body from the hands, facial expressions and body gestures. Deaf people are ‘more honest’ –  If you’re happy or sad, you show it in your facial expressions and hand signals, compensating for the shortfalls nuances in verbal communication. But being deaf isn’t as easy as it seems.

Turning a full 180 degrees from her convicting speech at dinner, Sylvia grapples with her increasing deafness which was evident as her voice changes from scene to scene. The deaf is much like the hearing – albeit a much small community – where hierarchy and rules also exists. At one point, Sylvia explains that Billy was in the honeymoon (first) phase where everything about the deaf community is comforting and nice, while she’s already at the third phase and ready to get out.

“Can you all stop being so possessive? People do things for the people they love. Like me, wearing a bloody kimono.”

Veterans Pang (dad) and Tordoff (mom) shows off some serious acting chops with their fiery dialogues and often humorous banters. I particularly like Tordoff’s delivery which adds much exposition and humour to the family’s dysfunction. At one point, mom and dad walked the stage quarreling and half naked, in the presence of their children as if to make the point across to the audiences how dysfunctional the family is.

Yap’s portrayal of Daniel from over-confident ‘prick’ to stammering individual was believable and his scenes with Billy touching, although I’m not so sure about the Daniel-Sylvia arch which was perhaps unnecessary and over-complicated for a two hour play. Apart from this, Tribes is simply a delightful play to watch from start to end. All the actors were super (and humourous and fun to watch) but lead character Thomas Pang clearly stole the show. His debut performance as a deaf boy was natural, believable, heartbreaking and touching all rolled into one and he deserves a medal for this. I am looking forward to his performance in Cake Theatrical Production’s VERSUS in August but that’s another story for another day.

Many thanks to Pangdemonium for the tickets. Much applause to Pangdemonium for also including simultaneous Sign Language Interpretation in the play on select dates to cater to the hearing impaired.  I highly recommend catching Tribes (one of the more affordable plays that comes with a first class story line). Leave your kids at home though. Sexual innuendos are aplenty in the play, which is all in good fun of course. RW