Is it really necessary? Why not a neighbourhood primary school?

I was having a conversation with my colleague the other day and found out that she rented a unit in The Minton despite owning a property in the West. Perplexed, I asked more questions and that was when I discovered that she made the move so she could stay within 1km to Paya Lebar Methodist Girls’ School (PLMGS) and get her daughters into the school. For those who don’t know, PLMGS is one of the more popular primary schools in Singapore, taking the 31st spot in the 2016 Primary School Ranking list.

She went on to tell me that she came from a neighbourhood school. During her time there, she ‘had the time of her life’ with her friends and acing her studies wasn’t her top priority. Fortunately for her, she did relatively well in life; achieving fairly okay grades for her studies later on, landed a good job and started her family. But many of her friends were not that fortunate. And that was the driving force behind her determination not to let her children go through a similar route.

My colleague joined the assembly of parents past and present who will do whatever it takes to send their kids to a ‘good’ primary school. But what makes a primary school ‘good’?

What makes a primary school ‘good’? 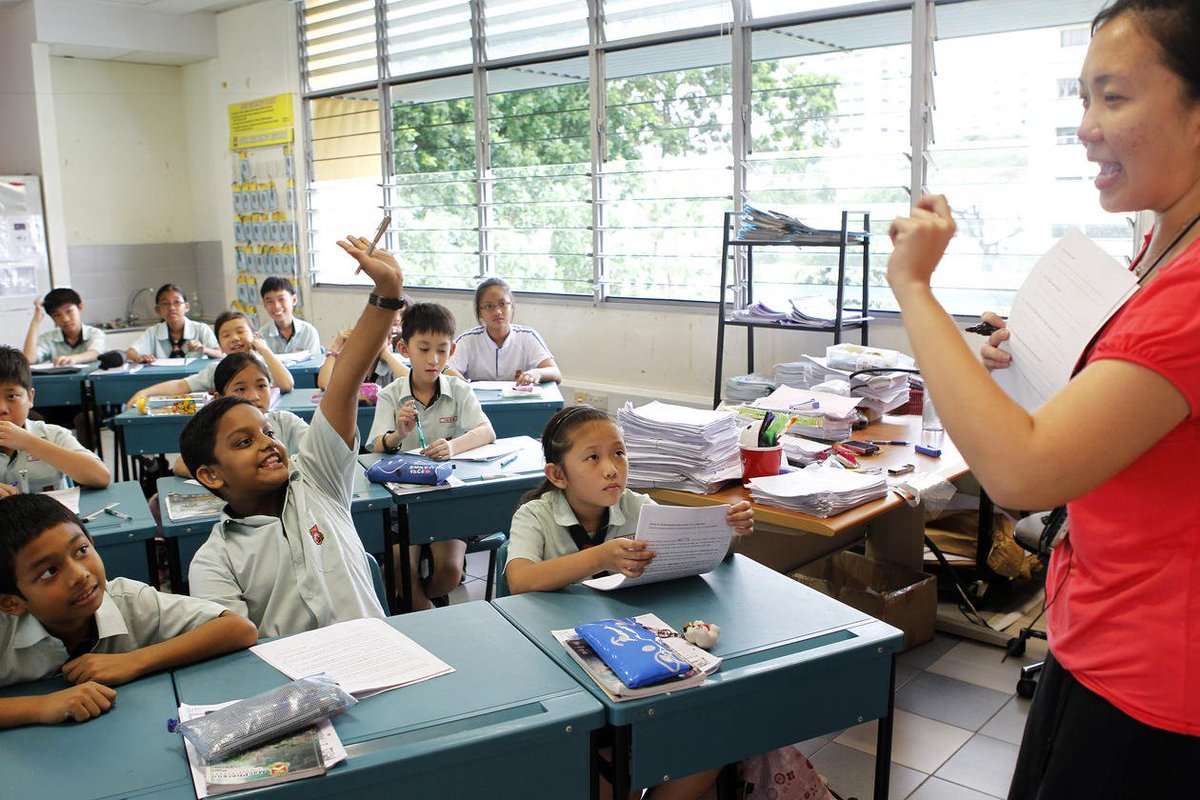 Further segregated into ‘branded’, ‘top’ and ‘elite’, sending one’s kids to a good primary school ranks high in priority for many parents for the longest time. The common traits that these primary schools share include:

For more information on the primary school phases and procedures, click here.

Every School, A Good School?

Perhaps the Government is trying to back-paddle on their previous stance and deal with this growing elitism issue. The slogan first mentioned by PM Lee in his National Day Rally speech in 2010 and popularised by then-education minister Heng Swee Keat at an MOE seminar in 2011, the Government sought to bridge the divide between the supposed-good primary school and a neighbourhood primary school. Putting their hand where their mouth is, the Government has made adjustments to the handling of PSLE with the most recent move to replace revealing T-scores in favour of 8 scoring bands instead.

I asked my colleague, “Do you agree with the Government’s statement?” She replied in a heartbeat, “No, of course not.” Well, good is relative. Good can mean a school’s ability to educate a child, to get them curious with acquiring knowledge, or to inculcate good values in them? Perhaps her – and many other parents’ – definition of good is the school’s ability to help their child get good grades for the much-needed boost in hyper-competitive Singapore.

I do agree with the Government’s statement that every school is a good school with qualified teachers and a sound curriculum. However, I would say that not every school presents the same opportunities to a child.  Statistics and probability don’t lie.

Are Grades And Going To A Top School Everything Then?

I thought it more as a propaganda move but a 2015 article published by The Straits Times described how many parents are choosing neighbourhood schools for their kids instead of branded ones. Sending one’s kid to a top school may increase the odds of one’s kid doing better later on in life, it also comes with its challenges.

Studying in a top primary school can be extremely stressful, do we want to subject our children to such stress at a young age? With the Government’s push for more well-rounded students (who are also expected to do well in CCAs) as opposed to students who just excel academically, the demand on a student’s time and cognition could be amplified. It may also require parents to uproot themselves and plan ahead since they have to stay at the registered address within 1-2km to the choice school for 30 months.

At the same time, perhaps something needs to be done with the labelling of primary schools. While we can’t make every school equal because it just isn’t going to work, we can stop calling normal primary schools ‘neighbourhood’ primary schools. It carries negative connotations?

I was with a friend with a family of five at The Criterion EC showflat and another client at Kingsford Waterbay showflat just last Sunday, and witnessed how both parents with no relation with each other are unanimously determined to upgrade to provide a better lifestyle for their children. In the end, everything that parents do, they do it so that their kids can be happy. Some parents decided that the only way for their kiddos to be happy is to make sure they do well in life. Some parents just want their kids… to be happy. There’s nothing wrong with both schools of thought.

The Pursuit Of Happiness

But if it was up to me, I would say it isn’t absolutely necessary to send my child to a branded primary school. I rather my child be happy above everything else. But that’s just my opinion.

The Government has made many active steps to highlight their stance – that every school is a good school – but parents just aren’t buying it. And they won’t, neither will their obsession with branded schools and grades let up.. Unless we see our Ministers’ children start attending neighbourhood schools, all the measures to bridge the divide would be for naught.

When the Ministers does do so, perhaps then we can send a clear signal that the hallmarks of a successful child is not just in getting into good schools to get good grades; but one who is morally upright, socially responsible, has a thirst for knowledge for knowledge’s sake and most importantly, one who is happy.

What are your thoughts? Do you think that it is necessary to send your child to a branded primary school? Why or why not? RW

Share this article with your friends! The above article represents the writer’s honest opinion and does not reflect the sentiments of any Government organisation and bodies. Need advice on finding a property near primary schools? You can reach me at 9-833-6450 or eugenetayhy@gmail.com. The author is a licensed real estate salesperson with Propnex.

For public relations and copywriting enquiries, please email me at reueleugenetay@gmail.com.