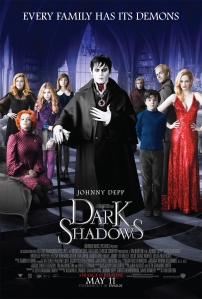 Lots of unpleasant things has rocked our once-peaceful tropic island lately; death of national servicemen, MRT repeated disruptions which-I-don’t-know-why, the impending arrival of Lady Gaga.. So on and so forth. Picking up the newspaper and glancing through the headlines can be rather depressing at times like this (not that headlines has ever been very positive in the first place), but thank God for movies.

Being a BIG movie fanatic, how can one miss the dynamic duo Johnny Depp and director Tim Burton’s latest film; Dark Shadows? Dark Shadows talks of a dark tale (puns puns) of Barnabas Collins (Johnny Depp), a rich and hopeless Casanova from the prestigious Collins family in 1872, who finally falls in love with his true love; Josette du Pres. Dark as the story goes, one of the ladies, Angelique Bouchard (Eva Green), a witch whose heart he broke cast a spell on all his lovers, making every single one of them commit suicide, killing Collin’s parents, turning Collins into a vampire and subsequently locking him up in a coffin.

196 years later, Collins awoke from his slumber from an accidental excavation only to find his beloved Collins Manor in a state of disrepair and his (highly dysfunctional) descendents struggling to make ends meet after their main business was falling apart due to the acts of the very witch who turned him into a vampire. Chaos ensures as Collins battle it out with Bouchard to restore the glory of the Collins, dark secrets of the family is swept out of the carpet, and Collins fighting to protect his new love Victoria Winters (Bella Heathcote) who’s a splitting image of Josette, from suffering the same fate.

As usual, Depp puts up spectacular acting through his quirky personality; his expression from being fascinated by the big M (for McDonalds) and a weird terrain (road) is priceless, not to mention his old Georgian English which have smitten the hearts of some of my friends. Eva Green is so wicked at being wicked yet so able to bring out her deliciously sexy sex appeal at the same time (you kinda hate her but love her, now that’s what I call acting). Though a small role, one of my favorite up-and-coming actress, Chloë Grace Moretz plays it well as the rebellious descendent of the Collins, (and secretly a werewolf).

But that’s about it. The star powers in the film are  really the redeeming grace for the film which so disappointingly lack in plot and depth. Is Victoria Winters the lead character or just a side character, I don’t know. Unlike Burton’s previous films, Dark Shadows is a pretty ordinary movie which lacks that special spark, magical touch, X factor, Allspark, chemical X, whatever you wanna call it to make it a blockbuster. The movie is one that is cliché, forgettable, and is entertaining to say the most. Watch it if you’re bored or just a Johnny Depp and Chloë Grace Moretz fan like me.

Verdict: 3 out of 5 movie bites