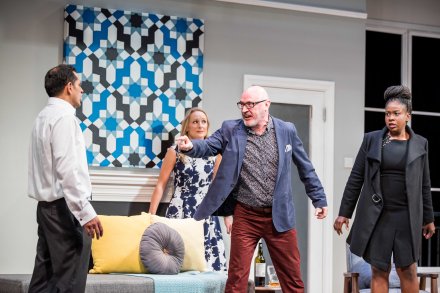 Talking about race, language or religion is never comfortable nor an ideal tabletop conversation topic (especially) in politically-correct Singapore. So when Singapore Repertory Theatre was granted approval by Singapore’s Media Development Authority to run the play without the slightest bit of amendment to the script, we know we are in for a ride.

The play written by Pakistani-American novelist and screenwriter Ayad Akhtar first premiered in Chicago in 2012, bagging the 2013 Pulitzer Prize for Drama and many subsequent soldout shows across theatres in the US and Europe since then.

Set in a swanky apartment in Upper East Side New York, successful Pakistani-American lawyer Amir Kapoor (Gaurav Kripalani) and his American artist wife Emily (Jennifer Coombs) invites their friends and couple, Jewish curator Isaac (Daniel Jenkins) and Kapoor’s African-Amerian colleague Jory (LaNisa Frederick) over to dinner. We get this sense that Amir identifies and has assimilated into the American community, hiding his Pakistani-Muslim roots from friends and employers, even going so far as to change his surname from Abdullah to Kapoor.

The couple was first visited by Amir’s nephew Hussein Kapoor or Abe (Ghafir Akhtar); for the junior Kapoor explains that the latter helps him to assimilate into the American community like his successful lawyer uncle. Abe sought his lawyer uncle’s help to represent an Imam who was being persecuted for allegedly raising funds for terrorist activities. Amir refuses to even attend the hearing in fear of endorsing a faith he no longer has any love for but relents upon the persuading of Emily.

The dinner session started out tame but quickly takes a turn for the worst. While Emily embraces the Islamic art and its spiritual traditions, Amir explains to the dinner party that Islam is a violent and backward religion that has no place in modern society, throwing many one-two punches – such as citing Islam for promoting violence (against women) and the creation of Taliban – to Jory’s agreement.

Isaac confronts Amir to clarify his politically incorrect views on Islam extremism to which the latter announces that he feels innately happy that they – referring to the Muslim community at large – are finally winning when 9-11 took place, and that anti-Semitism is the way to go. Mayhem followed.

Amir’s decision to attend the Imam’s hearing comes back to haunt him as his law firm headed by Jewish partners bypassed the better-qualified Amir to give his coveted partner position to Jory instead. Another sign of Islamophobia. Abe witnesses the breaking down of Amir’s successful life and marriage, and decides to embrace Islamic extremism over assimilation.

Dialogue throughout the play between the five casts is witty albeit laden with stereotyping, bias and a truckload of anger. Like when Amir ridicules the faith of his ancestors by claiming that “Islam is a religion of tough people who suffered in the desert.. with a very angry hate mail to humanity” and “White women take out clothes to make people like them.”

There is nothing politically correct about Disgraced as the different characters representing different backgrounds lay out all their cards – or biasness – on the table. While the play was primarily focused on Islamophobia, Akhtar sought to address the greater picture which begs the question, what is our own implicit bias?

And how do we reconcile our differing values against one’s cultural beliefs? How does one sift out the good values from the bad when it comes to faith? Amir’s role as an agnostic who turned his back on Islam sheds light on this issue. Many things have been said on the addressing of Islamophobia but not much on Muslims themselves. Hardwired into Amir are Islamic values, some of which are portrayed to be extreme in the face of modernity – to which he drew a connection had no place in today’s world. He believes that even the remote connection that people make of him to his faith and community will cause him to be isolated and bypassed for promotion at work. On the contrary, Abe decides that he must embrace extremism because he will always be isolated and judged no matter how hard he tries to assimilate.

The portrayal of Amir as an agnostic who turned his back on Islam, Isaac as a progressive Jew are not exactly the best role models for both faiths in question but it does not have to be because we hardly find perfect people with perfect representations in real life. Even Jory’s role as an African-American minority and a sceptic of Islam – perhaps representing the majority of Trump’s Islamophobic supporters in light of the recent election results – is not accidental.

To these problems, Akhtar has no answers. And that is the greatness of Akhtar’s play directed by Nate Silvers. Even if we pretend that everything is status quo or cordial, race, language and religion has and will continue to be a divisive topic. And oftentimes, we forget that the people (Muslims) who are at the centre of debate also have to deal with identity issues of their own. Perhaps knowledge will empower us to make better choices when it comes to socio-cultural issues.

Topics on faith and race are always contentious subjects but kudos to the entire SRT team for a job well done in bringing these often-swept-under-the-carpet issues to light in a matter that is not condescending to the audience. I would also like to acknowledge MDA for giving the go-ahead for this sensitive but important play to be performed in local theatre. Two thumbs up!

Located in a spacious Upper East Side apartment in New York, Amir has worked hard to achieve the American Dream. With South Asian Muslim roots, he has gone on to become a successful lawyer, has a beautiful American wife and even a wardrobe of $600 custom-tailored shirts.

But when Amir hosts a dinner party for his African American colleague and her Jewish husband, the initially pleasant evening erupts into a volatile argument over race, religion and class in the modern world.