Reuelwrites documents his journey, stereotypes and the confronting of his inner demons as a bald human being.

Hi, I’m Reuel Eugene. I’m a Singaporean Chinese. I write pretty well and I was a finalist for best OMY individual blog 2015. I’m as healthy as an ox. I give my level best to my clients as a property agent and I’m pretty good at speaking too. I love to do backpacking, I appreciate art, I am good with holding my own in conversation, and some ladies say my one-liners are pretty smooth. Oh, and I’m bald.

Awkward silence. Balding is often viewed (by both the individual and third parties as being) on the same level as a death sentence, and I sure felt like it was the end of the world for me as I went through this condition. What’s wrong with being bald? Are we any lesser than other human beings with a head full of hair? Before we go further, let me share my own story of how I came to be  a baldie.

I grew up in a family where everyone in my paternal grandparent’s side of the family had to contend with hair loss. But when you’re a kid and you have a head full of hair, the thought that you could be dealing with hair loss one day just never occurred. There was even a point of time in my adolescent years when I was cussing for having thick wavy hair. As I turned 18, I began to notice more hair in the hair trap of the shower drain. I thought to myself, “It’s just a little more than usual.” The incident became an issue which eventually turned into a crisis of sorts the year that I was in bible school in 2011. I was only 22 then. I noticed that there is a very significant void (aka no hair) at the crown of my head and the ever-receding hairline.

Having dealt with low self-esteem since my childhood days, experiencing hair loss even before reaching adulthood was a big blow to my esteem and I honestly struggled to contain my emotions. That same year, I enlisted into national service. Needless to say, my hairstyle and I was the butt of jokes for the assholes. Struggling to mitigate the problem, I turned to prayer, hair loss shampoos and even Yun Nam (which costed a fortune). All was ineffective until I found Caboki.

Caboki is a hair concealer and it worked like a charm. How it works is that, its fibers will stick onto your existing hair, making the bald spots look that much fuller. I perfected the art of using Caboki (it requires some skill) and managed to conceal my hair loss for a good two years. But I know that the solution was only temporary and I have to face this condition again eventually. As my hair continues to shed, it was becoming increasingly difficult to conceal the hair loss. Plus, I felt like I was living a lie. I felt terrible that I had to measure up to the social norms of a ‘healthy body image’.

I felt so lousy about myself and I always asked (God) why it has to be me, at this young age? I engaged in much negative self-talk, allowing my inner demon to beat the pulp out of me, telling me I’m worthless and ugly.

In October 2015, as I prepared myself for my jaw surgery, I told myself that I don’t want to live a lie anymore. I want to love myself for who I am. So what if I’m bald? So what if people will stare? So what? Does that make me a lesser human being? Should people’s judgement over me matter that much to me? With that, I took the plunge and shaved my head the day that I admitted into hospital for the surgery. The experience was liberating in the first few days but it quickly died off as I struggled with my self image and esteem.

I hid behind my post-surgery excuse as cover, staying at home and not going out so that I don’t have to see anyone – or to be seen by anyone for that matter. My church members were caring and they came to visit, even though I wasn’t comfortable with being seen in my ‘state’. But eventually, I knew that I can’t hide forever, since I already decided to bare, or should I say bald it all? (Laughs)

The day that I decided to go to church, I met my dear friend Serene on the way and she encouraged me repeatedly that I looked fine (when you get the approval from a beautiful air stewardess, things gets better lol). I never realised how important it was to me to look right to people and stepping to church was tough (stemming from my lifelong struggle with self-esteem, I always felt the need to impress the people I know in church). Slowly but surely, I began to heal.

I went on two backpacking trips (read my guide to Vietnam here) and met so many travellers, strangers who have never saw the full-headed me. We hung out, had fun and drank (quite a bit). Today, I am proud to say that I have confronted my inner demons (and won). I love myself, with and without hair. Honestly, there will still be days where I wish I still have a head full of hair, but I am thankful nevertheless even without it.

It’s damn irritating when people call me ‘One Punch Man’. Trust me, if I really was the character, I will punch you | PHOTO: taringa.net

Have you ever heard from people that being bald is bad for business? I have. Being a real estate agent that I am, I have heard clients, friends and even relatives telling me that I shouldn’t shave as it’s ‘not good for business especially my line of work’. Firstly, I disagree. Not just because I am in the sales line, but I refused to accept that I cannot succeed just because I am bald. According to many researches online, it was reported that guys with shaved heads are also seen as 13% stronger, taller and having greater leadership potential than guys with a full head or thinning hair.

Rather than being viewed as incompetent, men who go bald are viewed to be dominant, people who take charge, people who end up as the helm and main decision-makers of top companies. I’m not saying that being bald is a prerequisite to being successful, but that we have equal chances of being successful – if we put in the same amount of hard work and effort.

2. Bald People Are Not Attractive

For too long, we were conditioned to believe that a beautiful woman is one who has long silky hair like those Pantene models, and men should have manbuns (currently trending). Hair loss is like contracting Aids. Suddenly, you become the lowest lifeform, the undesirable, the scum of the earth. But as we look back at history, we know beauty to be subjective – influenced by popular culture and sentiments of the time.

Take plump for example. European women who were plump during the Renaissance period (14th to 17th century) were often viewed as attractive. This is not the sentiment shared by people of our times because of our conditioning of beauty via the television media since young. Just like the unhealthy body image of wanting to match up in slimness, it is unhealthy to despise oneself just because one is bald. In history, the Manchurians (Chinese), Japanese and several other races were known for practising the bald culture.

Of course, not everyone can rock the bald look but it takes guts to go bald in a world that is defined by the media according to how stylish your hair is, how big your biceps is, how thin your thighs are and how big your boobs are. I think that courage is attractive.

I take offense with this because I want to get married someday and show filial piety by giving my parents the grandchildren that they have been longing for (Laughs). Someone recently told me that I should wear a wig because girls don’t like guys who are bald. I found that to be offensive and absurd really. Firstly, that is saying that girls (or guys) are shallow and can only go out with a guy for how he looks and not for his character. Today, we are often told (by the media) to value image over character and everything else

In an exaggerated example, Guy A has Brad Pitt looks but treats you like shit, while Guy B is bald but he knows how to treat a lady right. Whom would you prefer? For too long we have been conditioned to view baldness as a disease. Hair treatment companies bombard us with their hair loss treatments over television, and the media tells us that people with hair loss are ‘ugly’… When there is nothing wrong with being bald.

I don’t know about you, but I believe love should be about passion and commitment, not about how much hair one has on his or her head, isn’t it? In some extreme post-natal scenario, women experiences hair-loss after giving birth. But you don’t see men forsaking their wives do you?

Of course a balding man/woman might not look as good as a ‘normal’ man/woman, but baldness doesn’t make them any less of a lover. Period. 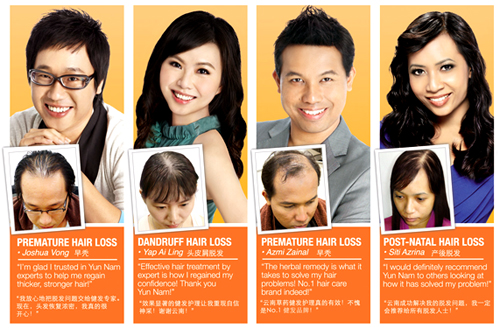 First of all, we must establish if balding is really a terrible disease? For some people, balding is in the genes and they simply can’t help losing hair – unless they pay tens of thousands of dollars on hair loss treatments, all of which can be better invested in properties for future dividends (let me know if you want to invest in a property in Singapore!). For some, balding was an inevitable process after seeking treatment (Chemotherapy for example).

Being a traveller and having participated in social work through the years, I know that balding is a negligible condition compared to people with bigger problems and illnesses. Problems like poverty and starvation. Illnesses like cancer, celebral palsy, heart disease, loss of limb, et cetera. These are the real illnesses and problems that require full, immediate attention. Not hair-loss. One might lose hair (early as in my case), but that shouldn’t stop us from living a full and enriching life that many others are deprived of, especially those in impoverished countries.

Today, there might be some of you brothers and sisters who are struggling with hair-loss just as I had and are considering your options. Yes, you can try the hair-loss treatments, yes you can buy Caboki to conceal your hair-loss, yes you can wear a wig or a cap, but at the end of the day, all I want to tell you is, You got to learn to love yourself for who you are, not how you look. Only when you love yourself, can healing take place. You are no lesser than every other human being! So what if you don’t have hair?

In the end, we all want happiness and we will all eventually return to the earth as dusts. I don’t want to remember for how much hair I managed to retain on my head, but how loving I was to my family and friends, and my contribution to society. RW

2 thoughts on “The Art of Being Bald”