Since winning Singapore Idol  Season 3 and serenading his fans with his first single ‘Broken’, singer Sezairi Sezali has been off the radar. Now that he’s done with National Service and has put a ring on it (Sezali proposed to his girlfriend of six years on the film set of 1965), he’s ready and the world is his oyster. 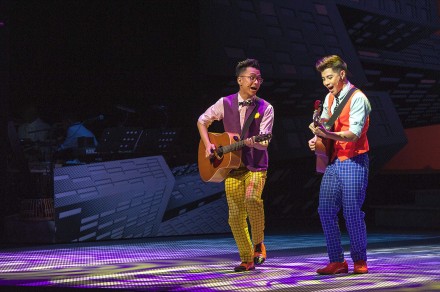 I speak to Sezali on his latest gig which isn’t singing but acting in a W!LD RICE pantomime production, The Emperor’s New Clothes (read my review here).

Check out my interview with Sezali below. RW

RW: We last saw you as ‘Adi’ in your debut film, 1965. Tell us what have you been up to ever since winning Singapore Idol?

SS: Wow, that was 5 years ago, time flies. I’ve been doing a lot of things but recently I have been working on a self titled EP that’s due for launch soon. It’s my first English release since “take two” in 2010.

RW: And you accomplished something else on the set of 1965 didn’t you? Congratulations on your successful proposal! Now tell us how did that idea came about?

SS: Honestly, I just thought it’d be really cool to propose on the set of an epic movie. Then I started asking myself all these questions like, “are you really ready for this, this is the rest of your life. “ When I checked all the boxes, I just went for it.

RW: W!LD RICE’s The Emperor’s New Clothes is the first pantomime you are starring in right? What’s your biggest challenge in the production?

SS: The biggest challenge for me was really the physical aspect of having to sing, dance and act at the same time. Having to get my motor functions to listen and work together was quite a tough time.

RW: I saw you and Benjamin breaking out some serious bromance in that cheeky ‘kissing’ photo. You guys are really ‘close’ (Laughs). Tell us honestly, what’s it like working with The Sam Willows musician both the good and the bad.

SS: Lets start with the bad. Working with him sucks because he’s so ridiculously good at everything he does he makes you question your own capabilities. But seriously though, Ben sets a new standard for what a leading man has to be, you can no longer just be good looking. You need to be smart, forward thinking, creative and hard working all at once.

RW: What’s your favourite line from the production?

SS: The empress’s line “ I ask myself Jeanette, how? I slap myself, Jeanette, owww. “ get’s me everytime.

RW: Lastly, tell us why we should catch The Emperor’s New Clothes?

SS: You’ll leave the theatre having laughed until your chest hurts. And also realizing things about your country, your surroundings that might not have been reflected on to you. It’s a real sensory experience.