Hello Goodbye proves that a man and woman should never be left alone in an apartment.

Singapore Repertory Theatre presents Hello Goodbye, the first romantic comedy staged in 15 years not since 2001’s Barefoot in the Park. The play will be staged at the DBS Arts Centre from 2 to 26 September 2015. Hello Goodbye is written by Peter Souter and directed by Lisa Spirling.

“Who the freezing fuck are you?” exclaimed the vulgar damsel upon discovery of a man in her supposed newly rented apartment. Gold 905 radio DJ Denise Tan plays outspoken and fiesty Juliet whose life is in a mess while heartthrob Shane Mardjuki plays introverted toy collector Alex whose life is about to become one.

Turns out, there has been a mistake on the side of the side of Juliet’s property agent, leaving her in distress. However, our heroine is not be outdone, exchanging snappy banter and witty one-liners in an attempt to lay claim on the apartment as her rightful birthright.

Despite being threatened that a beating by Juliet’s muscular boyfriend ensures should he not vacate the apartment, Alex doesn’t buy it. The two begins a narrative exposition where Juliet reveals she is in a crisis after being caught red-handed for a serious case of infidelity with her flatmate’s husband-to-be on the wedding day itself.

Temperatures rising as Juliet takes off her top and makes out (and proceeded onto you-know-what) with Alex who in an earlier moment, swore off being interested in the former. Fast forward by 10 years, the duo is filing for divorce. Old and new issues surfaced in one climatic scene that unsurprisingly does not derail the narrative which ends with a happily-ever-after.

A romantic comedy that runs on the typical Hollywood-prescribed formula, it’s difficult to dislike Hello Goodbye. But I’m not saying that it is the ‘Romantic Comedy Play of the year’. The dialogue overladen with witty banter and wordplay was well-thought-out and funny on many occasions. Eg. “The moment I drop my front (meaning her emotional barrier), you’ll want to see my front (meaning her chest).” Yet I find myself grasping for air – and for something different for a change – by the end of the first act. 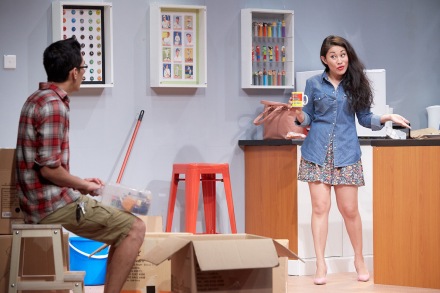 Tan did a stellar job with Juliet but I would reckon that audiences find it hard to sympathise with the female protagonist. Her infidelity becomes a recurring topic in the play as was the case with us audiences since she did indeed have an affair with her flatmate’s husband and later with some dude who drives a Aston Martin behind Alex’s back.

Although Tan and Mardjuki had great chemistry on stage, it was a stretch to find any compatibility at all between Juliet and Alex other than the fact that they are both warm-blooded and they both enjoy a good sex. The narrative was advanced through dialogue a tad too recklessly as both went from complete strangers and mortal enemies, to can’t-take-my-lips-off-yours lovers in a matter of 40, or 39 minutes to be exact. Blame the pheromones!

There were some sweet moments in the play though. I liked the part where soon-to-be-single Alex hands Juliet a piece of bubble wrap because she loves to “pop the bubbles” and when she discovers that the locked chest actually contains a collection of all things Juliet – including her passport?

But the story plot goes critically thin when issues like Juliet’s desire to have babies, Alex’s lack of verbal affection is brought out again after 10 years. A newlywed’s honeymoon phase would have worn out by a year and those issues should have surfaced 10 months into marriage and not 10 years after.

However, if you get logic out of the way, Hello Goodbye is every bit of the feel-good romantic comedy that it positions itself to be. Both Tan and Mardjuki did a wonderful job in their roles. In the end, Hello Goodbye leaves you feeling everything is going to work out just right – if the baby comes. RW

Many thanks to SRT for the media passes.

After a sell-out run at the Hampstead Theatre in London, SRT is delighted to bring Hello Goodbye, the hottest romantic comedy of the year to Singapore. Featuring a star cast including Shane Mardjuki (Shakespeare in the Park – Twelfth Night, Unlucky Plaza) and Denise Tan (Dim Sum Dollies, Gold 90.5FM DJ).