Thought-provoking Hungarian production, Dementia ‘prompts you to think about the endgame of human life’.

Singapore International Festival of Arts presents visceral melodrama, Dementia. Directed by Kornél Mundruczó, the Hungarian production is staged in the Victoria Theatre from August 13-15. Dementia is performed by the Proton Theatre group.

The stage is set in the psychiatric hospital in post-socialist Hungary. The once world famous hospital which back in its heyday could accommodate up to 400 beds and patients has been reduced to just 4 beds and patients; operetta prima donna Mercédesz Sápi (Lili Monori), once brilliant mathematician Lukács Steixner (Gergely Bánki), communism regime survivor simply known as the Dentist (László Katona), and Lady Oci (Orsi Tóth). The hospital is run by neurologist Dr Szatmáry (Roland Rába) and his pretty nurse sidekick Dóra (Annamária Láng).

We get right into the action in the hospital’s Open House fundraiser event with Dr Szatmáry – who seems to be a little loony himself – entertaining the audience with his funny antics, and live performances by the ‘Dementia band’. Dr Szatmáry explains that his music therapy works; the music and the ‘scent of the mic’ triggers a familiar memory from even his most non-responsive patient, Mercédesz. The 10-time Kossuth Award prima donna smells the mic, gets out of bed, abruptly clears her throat, eyes lit up, and comes alive in her singing – as if by reflex.

The party balloons are burst and the Open House ended as quickly as it began. Just minutes earlier, the patients are getting better. But that belief is shattered before our very eyes right after the public event. The lights are turned off but the idiosyncratic patients aren’t.

Lukács dials his wife’s number and a English-speaking person picks up the phone. Dementia did not affect his language skills as he conversed fluently in English, demanding to speak to his wife. The dentist is tormented by his vivid traumatic memories of the communism regime and takes a bath in the middle of the night. Lady Oci struggles with imaginative sound and drinks blood samples from the fridge. Mercédesz speaks of her greatest desire which was “to clear the mailbox”.

Dr Szatmáry later makes a deal with the devil Bartonek and attempts to get the patients to vacate the hospital by rigging their mental assessment tests and signing off their rights. Silence hangs in the air after he declares the patients healthy and orders them to leave the facility. But apart from the hospital, where else can the patients call their home? 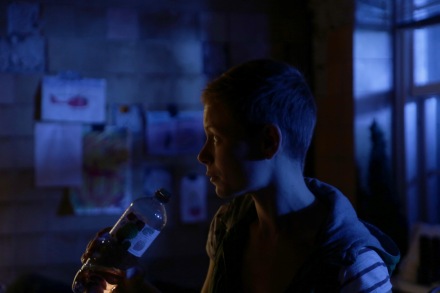 The set of the mental hospital featuring a ‘functional’ bathroom was very detailed and well-thought. Fold the ‘walls’ in, and suddenly the hospital interior is transformed into the facade right before your very eyes. I particularly love the ‘night’ scene where the houselights were switched off and we witness the patients left to their own idiosyncrasies. There is no glamour in suffering from dementia and the show sought to present us with just that.

The use of camcorder to progress the narrative throughout the production was also genius and allows us audiences to feel as though we were observing the story from a first-person perspective. Despite the language barrier and having to look at the surtitles, the nuances and body language from the remarkably talented cast spoke volumes.

Dementia mirrors the predicament of hundreds of mental patients who were evicted from the National Mental Asylum in Budapest in 2008. In essence, Bartonek’s sex vice business was a type of plot device to represent everything wrong about Hungary’s faux democracy, capitalism, social inequality and disparity. Being forgotten is one thing. But being evicted out of one’s home is another. “Re-appropriate mental facilities to make way for the nation’s economic progress?” There is only one outcome though. In one point, Mercédesz tells the audiences that “Only Death” invites their company.

Perhaps there is absolutely no gain from prolonging the lives of dementia patients, but to not do so is as good as murder. Perhaps, the preservation of their lives benefits us by preserving our own morality. Questions left unanswered.

What Dementia did for me was to remind me that we all have a chance to suffer from dementia. According to World Health Organisation statistic (2015), the number of people living with dementia worldwide is currently estimated at 47.5 million and is projected to increase to 75.6 million by 2030 and more than triple in 2050. In the hospital, we see people who were at the top of their fields losing their fight against the – as Lukács would put it – ‘Dead Cock Syndrome‘.

Once top Mathematician Lukács throwing away his first love, the keyboard aside was a powerful scene. It was a haunting moment in theatre as we are reminded that as neutrons are eaten away by nothingness, all that’s left of humanity’s best is but nothingness. Because dementia can strike anyone at any age, should we care for them in a dignified way since we could very well be lying on that hospital bed in the future?

But beyond the memory loss and disability for spatial thinking, dementia patients has not lost their personality and brilliance. Mercédesz could still do a solid soprano and Lukács could still remember phone numbers and speak in foreign languages. Perhaps deep inside our emptied consciousness, our true selves remains hidden unfazed by dementia and waiting for breakthrough in medical science. 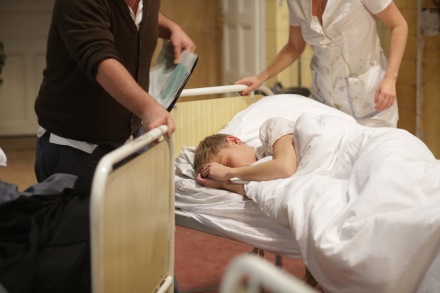 Often, it’s not just the dementia patients who had it hard. Their caregivers and families are also suffering together with them. As with the case of Dr Szatmáry and Nurse Dóra, all is not well and the years of taking care of the patients has taken a toll on their own mental health. In one scene, Dr Szatmáry goes ballistic and shifts the beds and furniture around so that the hospital can ‘comply to the European Union’s standard’ and perhaps get that much needed funding for the hospital.

It is only humanity’s tragedy that the dementia patients and their caregivers are often forgotten and left for death while the nation prospers and progresses.

The show comes to an emotionally-charged climax as patients and its caregivers suffocate in plastic bags while the flickers of the sparkles extinguishes one after another. Martyrs of capitalism they are. Watching Dementia was like taking one hard look at one’s own fragility and the degradation of our humanity. The politically-gripping, thought-provoking 2-hour production was engaging all throughout the show and left me at the edge of my seat.

Beyond cultures and geographical differences, dementia is something which trigger similar-opposing response from governments, healthy people and the patients themselves. And watching Dementia reminds us that our paths are all intertwined by this disease one way or another.

Many thanks to the organiser for the media invite. I highly recommend the Singapore International Festival of Arts’ Hungarian production Dementia. Ultimately, the production does not seek to give us definitive answers on what is right or wrong, leaving us to form our own narrative and discourse on dementia. And that’s what I love about Dementia. RW

Welcome to the world of Dementia, in which Mundruczó uses a heady mix of music, dark humour and fantastic décor to bring spectators face to face with the difficult moral questions which we, the able-bodied, would prefer to ignore. What benefit can society ever hope to reap from prolonging the lives of mental patients? What is the point of helping those who are suffering – specifically those who are not even cognisant of their own state – and numbing them even further with modern medicine? In Dementia, you decide.

One thought on “Dementia: Taking One Hard Look At Senility And Our Morality”