I love Augusts. It’s one of the best times of the year (after Christmas). Singapore celebrates her birthday in August (yay to holidays!), there are plenty of ‘national day’ deals islandwide, and there’s the Singapore International Festival of Arts (SIFA). From 6 August to 19 September, the public will get to watch and participate in as many as 65 free and paid SIFA shows.

For those who aren’t in the know, SIFA isn’t some ‘new kid on the block’. Rebranded as SIFA last year, the festival was previously known as the Singapore Arts Festival which really began as early as 1977. Singapore Arts Festival also brought to us highly acclaimed international acts like 2008’s opening show; Water Fools performed in the Singapore River by French group Ilotopie, and 2011’s opening show and by far Singapore’s largest outdoor theatre; When the Gray Taiwanese Cow Stretched by Ishinha (which also happens to be one of my first encounters with highly-artistic performative art shows).

Today, SIFA continues to be one of the most-important, if not the gold-standard for arts festivals in the region. One of the best part about SIFA is; it always sought to bring in international acts to cultivate and enrich Singapore’s art scene. SIFA also provides a platform for local budding artists to experiment and create multi-disciplinary and cross-genre works – works that may not be commercial sellouts but one that pushes boundaries and challenges perspectives to traditional mindsets.

This year’s theme is titled POST-Empires, and is curated by festival director and 2003 Cultural Medallion recipient, Ong Keng Sen. Coincidentally running in sync with the theme of Singapore Art Museum’s latest exhibition After Utopia, the festival looks at life after colonial regimes, and increased globalisation across countries and cultures.

After colonial regimes, after dictatorship, after communism, we witness a globalisation of life. What comes after the Empires from which we have emerged? How do we live with the global networks and monopolies of power which define the age we live in?… Can we rewrite the History that has been written for us? – SIFA

Mark down your calendars! Whether you’re just an ordinary Singaporean wanting to find out more about the arts, or a serious arts hobbyists looking to be awed, there’s something for everyone at SIFA. RW

It’s Singapore’s 50th Golden Jubilee. So it’s forgiveable that we entertain a third production that’s have anything to do with Singapore (after the mega-disappointing Singapura: The Musical and the theatrical spectacular The LKY Musical).

Different from the other musicals, NANYANG, The Musical looks into the ancestry of the Chinese disapora through the eyes of painter Chen Kang prior to their resettling in Singapore. Kang is an up-and-coming painter who has had to uproot himself from his motherland for reasons of career development and impending wars.

Infusing experimental mix of style and techniques from Chinese pictorial traditions and the School of Paris (Singapore Infopedia, 2009), the 南洋 or ‘Nanyang’ style – directly translated as the Southern Seas and referred to the entire South China Sea region – unique to the region was born, with Singapore and Malaysia being right at the heart of it all.

Perhaps using the allegory of Nanyang style as a metaphor of sorts on the Chinese diaspora in Singapore, NANYANG, The Musical will be instrumental in filling in the untold stories of our Chinese ancestors who merge different cultures to form a unique ‘Singaporean’ style. The musical will be performed in Chinese and surtitled in English.

Dementia is real. And it is plain scary, considering for fact that dementia affects one in 14 people over the age of 65 and one in six over the age of 80 (Alzhemier’s Society, n.d.).

Dementia is set in post-socialist Hungary, a world-famous psychiatric hospital is on the brink of being shut down. Only a handful of patients are left vegetating on the fourth floor, abandoned in the empire of amnesia. Directed by Hungarian director Kornél Mundruczó, the show throws in some often-ignored big questions like “What benefit can society ever hope to reap from prolonging the lives of mental patients?”, or “What is the point of helping those who are suffering – specifically those who are not even cognisant of their own state – and numbing them even further with modern medicine?”

Hitting hard back home, the show challenges us to define our moral standpoint on how we should treat people suffering from dementia, and resulting actions that follow. I can’t help but think that exploring this theme will open up a can of worms and pandora’s box because tackling this theme could very well spill over to readdressing the issue of euthanasia and other related moral dilemmas.

Personally, dementia is a topic that is very close to my heart since my paternal grandmother also suffers from dementia. I am really looking forward to watching Dementia. Dementia will be performed in Hungarian and surtitled in English.

Six Characters In Search Of An Author 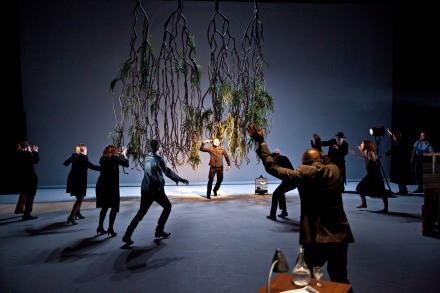 All lit lovers would know or have at least heard of Luigi Pirandello’s 1921 play, Six Characters in Search of an Author. The chaotic and metaphysical play takes an unadulterated look at the relationship between theatre practitioners, actors and their characters.

A dysfunctional family of six bursts into a rehearsal at a theatre with a curious claim: they are characters who have abandoned their author and are looking for someone who can complete their story. Intrigued, the director agrees to help. Along the way, everyone’s roles come into question. Who’s the actor and who’s the spectator now? Who’s the author? What’s real and what’s not?

Performed in French and surtitled in English, Six Characters in Search of an Author is one of the most famous theatre show in Europe which also won Pirandello a 1934 Nobel Prize in Literature. It will be interesting to see how us Asians comprehend and react to this rather unconventional and absurd play.

Web Link: Six Characters In Search Of An Author

Other Shows to Look Out For:

W!LD RICE productions are always very warmly received and there’s no reason why it shouldn’t – with the likes of Ivan Heng, Glen Goei, Alfian Sa’at and their crazily-talented cast on board. HOTEL contrasts the intersecting dialogues between past hotel guests back in the days of colonnial rule, and present hotel guests in Singapore long since the British Empire has ceased to exist. HOTEL will be performed in English, Malay, Tamil, Mandarin, Cantonese, Hokkien and Japanese.

Born from the desire to chart humanity’s passage from the beginning to its present state, Versus is a ferocious performance about our existence amidst all the wars we wage. We have learnt our lesson, or have we? Exploring the themes of war and humanity, Versus seems set to challenge our perspectives and blow our mind.

Funny man Kumar is back! Kumar’s Living Together is a series of live stand-up comedy performances rooted in Singapore’s multi-racial and multi-national housing landscape. Fronted by the witty and biting Kumar, these performances delve into issues that affect Singaporeans in the most personal and intimate of settings – their own homes.

DANCE MARATHON BUNDLE (Till 5 September 2015)
30% off ticket purchases
Valid with a minimum purchase of 4 SIFA productions and 2 Dance Marathon productions.

PUNK BUNDLE (Till 5 September 2015)
30% off ticket purchases
Valid with a minimum purchase of 5 Dance Marathon productions.

The Singapore International Festival of Arts pushes artistic boundaries through strength, vision and courage to present quality performances that mark it as the pinnacle arts event in Singapore. Located and created with Singaporeans, with a strong global connection and image.