Following the 84 gold medal haul at the 28th SEA Games, Singapore must decide if Singapore’s athletes are worth supporting.

Shanti Pereira (Athletics), Charmaine Soh (Netball), Soh Rui Yong (Marathon), and of course Joseph Schooling (Swimming). These athletes are probably household names by now. And they are only a faction of athletes who brought home the gold from the recent 28th SEA Games.

According to Channel News Asia, a total of 747 athletes and 347 official represented Singapore in the Games – the largest ever team representing Singapore at a major games. A total of 421 athletes made their first appearance at the SEA Games in this edition, and Singapore took part in 36 sports over the past 18 days of the competition. 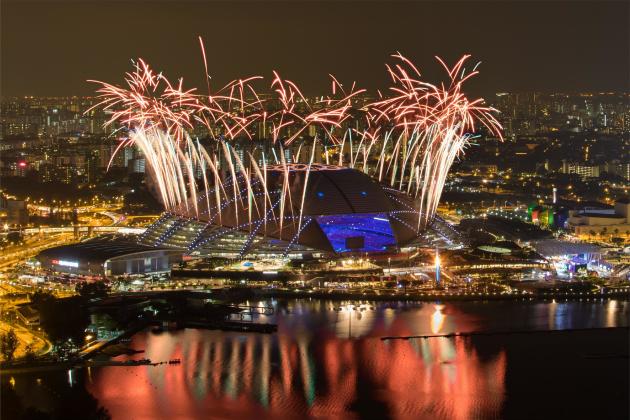 The athletes were not alone in their celebrations. Countless Singaporeans poured out their congratulatory messages for the athletes on the various social media platforms. Furthermore, news of Singapore’s draw against Japan in the World Cup qualifiers (putting Singapore at the top of the Group E table of the 2018 World Cup Asian Zone qualifiers) only made celebrations sweeter.

Truth be told, it was no surprise that Singapore would have organised a highly successful 28th SEA Games. But the 28th SEA Games also revealed something else; Singapore’s athletes can perform in high level competitions, and Singaporeans do want to support their athletes.

That also set into motion one burning question that Singapore has perhaps avoided for a long time; do Singapore’s athletes deserve (financial) support and funding?

Singapore’s marathoner Soh Rui Yong’s story was published on Straits Times on 19 June 2015. Soh defended Singapore’s SEA Games marathon title and retained the gold medal. Not one to settle, Soh has already departed for United States for further training and has expressed his desire to bring home an Olympic medal from the 2016 Rio Games. That dream costs at least $20,000 in airfare, accommodation and race registration fees which he has yet to secure.

CNBC ran a story titled ‘The toughest race for Olympic athletes is the one for funding’ early last year. The article explained that even medal-winning Olympic athletes from liberal countries like the United States and Canada face difficulties in their medals pursuit. Though the process has been a long and delayed one, more governments are beginning to back their athletes up financially – even though the level of support may be insufficient and extended solely to medal-winning athletes. However, some countries like the United States continues to let private sectors be athletes’ main financial support.

Beyond competing for podium finishes, government funding and support is crucial to the athletes’ development in their respective sport. I refer to a Channel News Asia programme whereby Singapore’s number two tennis player shared that she faced much difficulties raising the funds for international tennis competitions overseas (I can’t even find her name on the internet!). Win or lose, athletes gain much experience and exposure of their respective sport on an international level. It is pointless to compete against another fellow national player when they already know the other’s performance standards and capabilities. Athletes understand that winning a SEA Games medal is not the pinnacle of their career. There’s the Commonwealth, Olympics, and many other single-disciplinary events that they are gunning for!

Our athletes need to compete with other overseas athletes who are better at the sport than they are, for them to improve. But money is needed to send them abroad. They should be spending time training and focusing on winning the competitions rather than worrying on how to raise money to compete at those international competitions. They need to know that their fight to win medals for their home country is not a lost cause – that their country will support them.

The recent SEA Games has indeed proved that our athletes can bring home medals and are capable in doing even better. The ball is now in our government’s court. Can we back our athletes in their pursuit to bring glory to their country?

But tackling this question also brings to mind another hot button issue, can we as fellow Singaporeans accept sports athletes getting paid as much as us, if not more?

Referring back to Singapore’s number 2 tennis player, it’s disheartening that I can’t even locate her name on the internet. Besides government funding for competitions, we need to inform the public on who to support. An estimated 100,000 attended the 28th SEA Games Opening and Closing Ceremony out of which Singaporeans make up the majority. Figures excludes Singaporeans who watched the ceremony on television.

Singaporeans also showed up in force for competitions where Singaporean athletes were competing for gold; Netball, Swimming, Bowling, Athletics, Badminton, Silat, etc. But that few weeks of intensive press coverage of the athletes on newspapers and new media is not enough. We can’t possibly have a SEA Games or a YOG in Singapore every year to psyche us up and tell us who to support, can we? How can Singaporeans support and cheer for their local athletes if they don’t know what/how/where/who to rally behind?

We need more national recognition for our athletes. Feature them and their sport more frequently on television, radio, newspapers and online. Tell us about the domestic leagues for tennis, rugby, floorball, gymnastics, water sport, etc. Tell us where are they held and how can we attend those matches to show our support. Put them up on the public billboards and posters. Tell us who to support.

As with other countries, we cannot simply rely on government funding alone. Private sponsorship and support can also go a long way to bringing these athletes to places.

It’s comforting to know that there are companies out there in Singapore who see the value and substantial rate of investment in sponsoring local athletes. It was announced late last year that local brand Tiger Balm has appointed Singapore hurdler Dipna as their brand ambassador, giving her the financial assurance to train full time following her graduation from Nanyang Technological University’s Sport Science and Management degree programme. But a handful of such companies isn’t enough. And should sponsorship only apply to sports and medicated oil related companies?

Our athletes definitely do not even come close to Woods in terms of star power and return of investment, but less prominence also equates to less in endorsement fees. Instead of pouring thousands of dollars into advertising, supporting an athlete might be a much better investment. That few thousand dollars in sponsorship can mean a lot to these athletes. As companies in the private sector look to harassing on Corporate Social Responsibility to improve their brand identity, reputation and branding, the idea of supporting our local athletes as a form of CSR should also be taken into consideration.

While tax deductions are available for corporate donation to charitable and not-for-profit organisations, can the government also consider extending this privilege to companies who choose to financially back athletes? This incentivises the sponsoring of athletes for private companies while transferring the burden of funding athletes from governments to companies in the private sector. A win-win situation for all.