O, wonder!
How many goodly creatures are there here!
How beauteous mankind is! O brave new world,
That has such people in’t!

Miranda from Shakespeare’s The Tempest

You know you’re in for a good show when you know it’s a Shakespeare. The first and only play he created out of pure imagination, The Tempest was also Shakespeare’s last play before his retirement. Unanimously declared one of Shakespeare’s greatest works has both scholars and critics alike. 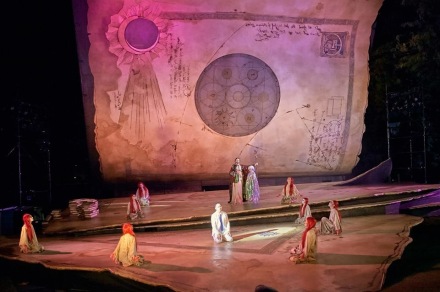 Set on the remote island, Prospero, the island’s ruling sorcerer and exiled Duke of Milan plots to restore his daughter Miranda to her rightful place. With the help of his spirit Ariel, he conjures the eponymous Tempest that brings his usurping brother Antonio, the treacherous King Alonso of Naples, Alonso’s good spirited son and Prince Ferdinand and his benefactor Gonzalo to the far-flung island. Chaos ensures, but with it the redemption of the King and the coming together of two young souls.

The Tempest is a highly anticipated annual event in Singapore’s cultural calendar and the Singapore Repertory Theatre’s 9th annual Shakespeare in the Park production. This year’s production features SRT’s grandiose and tallest set ever built in Singapore, and a stellar creative team from around the world. 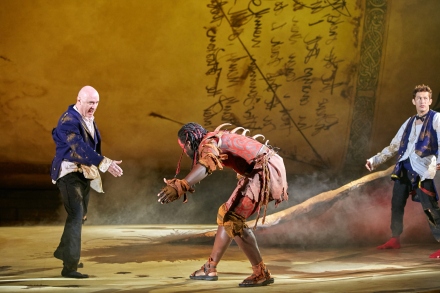 With dark skies looming above and the rain threatening to stir up a tempest (Hah!) in the park, I was getting worried that the play would be cancelled. But God forbid, the rain came to a light drizzle and an eventual stop, double rainbows appeared (literally) and the play went underway. Despite having to deal with the light drizzle and a slippery set, our actors delivered their lines perfectly.

All hail, great master! grave sir, hail! I come
To answer thy best pleasure; be’t to fly,
To swim, to dive into the fire, to ride
On the curl’d clouds, to thy strong bidding task
Ariel and all his quality.

Ariel from Shakespeare’s The Tempest

I found it amusing yet strangely befitting that the production chose to cast a female (Ann Lek) to play Ariel – There’s only one female character in the Shakespearean play. My Oh My, she breathed life into the character and was simply lovely to watch and listen to. But that’s not to say that the other characters did not shine. I love the playful banter between the trio Caliban, Stephano and Trinculo, the romantic dialogue – a Shakespearean classic – between Miranda and Ferdinand, Prospero’s soulful acting and even the prancing spirits!

And my ending is despair,
Unless I be relieved by prayer,
Which pierces so that it assaults
Mercy itself and frees all faults.
As you from crimes would pardon’d be,
Let your indulgence set me free.

Prospero from Shakespeare’s The Tempest
Prospero’s petition to the audience and, Shakespeare’s metaphoric inference to his final play and retirement from theatre

There is something magical about watching a play in a park under starry skies which no indoor theatre and its comfy seats can gratify. Watching the play with great pals, a tapas spread and even the sharing of umbrellas with strangers, this sense of intimacy I truly enjoy.

And might I say, with lavish sets by an impressive creative team and seasoned cast, SRT’s Shakespeare in the Park has once again outdone itself to bring to us audiences a world-class outdoor theatre experience at affordable prices. Many thanks to SRT for the media passes. I am looking forward to the next production already!