“I raised two children all the way to university through this business!” exclaimed stall owner Mr Chng. Chng operates the famous Whitley Road Fish Ball Noodle stall in Lavender Food Square together with his wife. Home to some of Singapore’s most popular hawker stalls like Kok Kee Wanton Mee, Whitley Road Fish Ball Noodle, Albert Street Prawn Noodle, Miow Sin Popiah and Carrot Cake, and Kin Turtle Soup, there is something here for everyone here at the iconic 24-hours hawker centre. With more than 30 stalls in operation and spacious space, Lavender Food Square can feed and accommodate as much as 800 patrons at any given time. Other features include the iconic high ceilings, retractable shelters and wide screen television sets broadcasting the latest football matches.

Built back in the early 1980s, Lavender Food Square was initially established as Bugis Square. The food centre was closed for renovation to fix its public drainage system which used to clog up and cause flooding when it rained. It later reopened in 1992 as the iconic Lavender Food Square that we all know today. A place of good food for most, a source of livelihood for some, many of the hawkers have practically been with the food centre for decades. Chng himself had been with the food centre for two decades. The shutters will come down over the legendary food centre in the later part of the year. One thing is for sure, Lavender Food Square has had a good run, and its memories will remain etched in the hearts of those who was satisfied by its savoury delicacies.

UPDATE: Period of photoshoot and interview was conducted in early 2014. Lavender Food Square is no more, teared down to make way for an office building.

Writer’s Note: While the photos have not been watermarked, all rights belong to the photographer (me). Requests for commercial use of photos will not be entertained. For requests for editorial use, kindly email me at reueleugenetay@gmail.com. 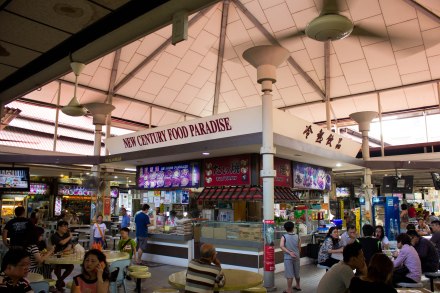