Shoes, heels and boots, you name it; they will fix it in minutes. Quiet and unassuming, the cobblers ply their trade daily both in the ‘Cobbler Square’ and in little pockets all over Singapore. It is a simple setup consisting of a foldable umbrella, the standard cobbler’s toolkit, some stools, and a trolley to transport everything. Uncle Robert Chong is one of the few remaining individuals whom I would like to call, the Savior of Shoes. The cobbler profession was once a thriving business back in the 50s when they were often referred to as member of the ‘five-foot-way trades’.

I watched Chong skilfully cut the rubber and put the worn-out heel back together; it was a skill that could only have taken years if not decades to perfect. Chong had been in the profession since 1975. Two young ladies approached Chong asking him to fix a wedge that was opening on the sides. Chong told the ladies that the wedge could not be fixed because the glue would not hold the wedge together anymore with only a split second glance. Chong’s companion told me Chong has never deceived his customers in all his years in the trade.

Chong raised two children with this occupation, one of which went on to become a school principal. I asked why did he not want to retire and “enjoy life”. Chong candidly replied, “Mending shoes makes me happy.. I will continue doing this until I die.” One day, this profession will cease to exist, but our children should know that there was a time when shoes could be fixed inexpensively and cobblers were the heroes we turn to. 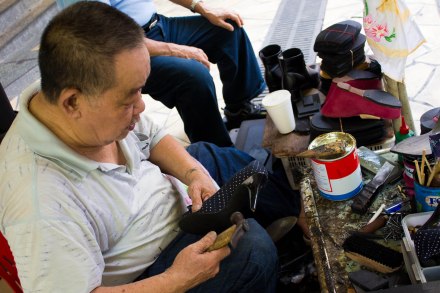 Writer’s note: The subjects in the photo has verbally consented to being photographed. While the above photos has not been watermarked, all rights belong to the photographer (me). Requests for commercial use of photos will not be entertained. For requests for editorial use, kindly email me at reueleugenetay@gmail.com.

2 thoughts on “Feature: Savior of Shoes”