Hey all, Merry Christmas! I was browsing through the internet and I found some interesting Christmas facts! Take a look.

It is said that the conception of the candy canes that we love to eat or decorate on our Christmas trees came from the shepherd’s staff (the three shepherds that visited baby Jesus on Christmas night). Another more down-to-earth story has it that a candy maker in Indiana came up with the idea of bending one of his white candy sticks into the shape of a Candy Cane, incorporating several symbols of Christ’s love and sacrifice through the Candy Cane; white symbolizing the purity and sinless nature of Jesus while red stripe representing the blood Jesus shed for mankind.

It is believed that the conception of ‘Santa Claus’ came from a real ‘Santa’, Saint Nicholas who lived from 270 A.D. to 343 A.D. Saint Nicholas was a very shy Christian leader, and one day decided to bless people (secretly without identifying himself as the blesser) by climbing to the rooftop of houses and throwing bags of gold down the chimney, while a girl was hanging a sock to dry by the fire. And this led to the folk legend that we all know today; Santa Claus. (It is also said that Santa’s look came from him!)

Christmas trees or fir trees actually came from pagan traditions of which these evergreen trees symbolizes endurance and undying life. But all that (Christmas tree) has been ‘christianified’ and/or secularized today. How Christmas trees ended up in homes today can be credited to Saint Boniface (who chopped down such a tree to prove to villagers that Norse gods are not legit) and later popularized by Martin Luther.

Did you know, that the Christmas Carol (aka Noël) that we all love to sing today suffered such a huge decline in popularity in the 15th Century and was only resurrected after the Protestant Reformation in later years. The “God Rest Ye Merry, Gentlemen”, “The First Noel”, “I Saw Three Ships” and “Hark the Herald Angels Sing” only came about during the 19th Century. 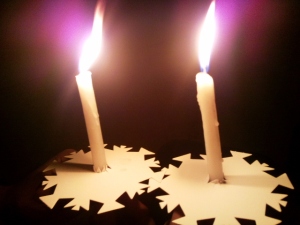 The Custom of lighting Christmas trees began in the United States while the use of candles began in Ireland during religious persecution. Suppressed Christians during that time put lighted candles in their windows on Christmas Eve as a sign of allegiance to Christ. Today candlelight services is part of the schedule of service to commemorate the birth of Jesus Christ, the Savior who has come to bring light into the world.

There you have it! Some intriguing facts on Christmas!
Here’s wishing you readers a Merry Christmas and a Happy, More Blessed and Prosperous New Year! Huat ah! 😀