Hey all. Thanks so much for checking back with my blog. Apologies for my inactivity for the past few days. Work-life is just so tiring, much of my energy is drained from work and the little amount of time after work was spent meeting friends, etc. Anyways, I’m really happy that LFC won the match over Blackburn Rovers even though that wouldn’t boost our rankings YET. (FYI: I was extremely exhausted because I went to Church in the morning, traveled to JB to chill out with friends, before heading for Harry’s to catch the match. But I still went ahead because it’s a Very important match for LFC!)

Our Greek defender Sotiris Kyrgiakos left his mark on the field by scoring a goal at the 47th minute at the second-half, and Torres finally ending his goal drought, scoring the decisive goal at the 53rd minute. The rest of the match were a few close calls for both but no goals for either sides, but that didn’t matter because we took the game 2 -1! It’s a good start if you ask me, to boost our players’ confidence. Gotta keep it up man! Things are beginning to look up for us as Stevie continues to perform, Pepe continues to do his thing, LFC players are passing more accurately and creatively, better lineup of players and even Lucas is playing better! Hahaha. Now we just need to do the same, if not better in the upcoming matches against Bolton Wanderers, Wigan Athletic and Stoke City. As my bro Alvin would put it, “Bury them man, bury them.”

Anyway, here’s a simple fanwork of Torres done by me using photoshop. It’s a picture of him speeding past Danny from Fullham. Check out the ‘dust’ he leaves behind Danny with a “You can’t catch me..” quote. 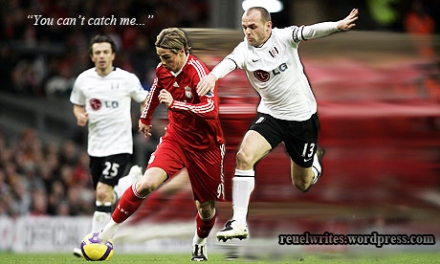