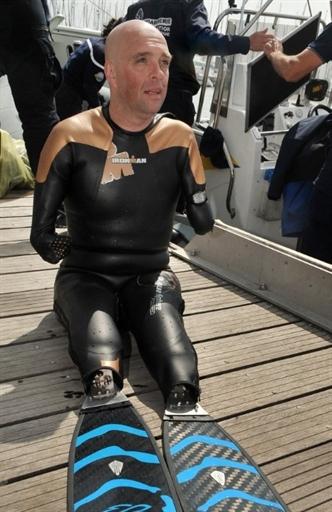 A Frenchman who lost all his limbs in an electrical accident successfully swam across the Channel on Saturday, a challenge he has been preparing for two years. Philippe Croizon, 42, set off from Folkestone in southern England just before 8:00 am (0600 GMT) and arrived on the French coast near Wissant just before 9:30 pm, propelled by his specially designed flipper-shaped prosthetic legs. “I did it, it’s crazy!” an overjoyed Croizon said on France Info radio, saying he hoped to become “a symbol of overcoming one’s limits.”

In 1994 the metalworker was hit by a 20,000 volt charge as he attempted to remove a television aerial from a house roof when an arc of current surged through him from a nearby powerline. Doctors were forced to amputate his limbs. As he recovered in hospital he saw a television documentary about a Channel swimmer and an ambition was born. The father of two said he wanted to complete the dare “for myself, my family and all my fellows in misfortune who have lost their taste for life”. Limbless Frenchman swims Channel – Yahoo

I was flabbergasted when I read this article on Yahoo. Here is this less-than-ordinary man who lost all his limbs in an unfortunate accident, but picks himself up, prepares 2 long years in order to conquer the English Channel. Many people have swam the English Channel, many of which failed a few times before succeeding the feat. Philippe Croizon succeeds in his first attempt despite his handicap.

There and then, I thought to myself, “What a remarkable person he is. If I was the one who got into the accident [God forbid], would I have the boldness to swim the English Channel, or will I even be able to regain my hope to live?”

Many people dream of big dreams and ambitions in life. But how many of us actually go out and run for those dreams? Though we may have our limbs intact – ready at point of time to chase after our dreams, we behave like someone who is ‘limbless’ to go everywhere. Even then! Even if life throws you a curveball, rendering us ‘limbless’, we must always maintain the Greatness attitude!

I believe all of us are made for Greatness. There are no boundaries [Kris Allen song! *laughs*] to Greatness. If Philippe Croizon can do it, why can’t any of us? No one should ever say that he is a failure. Should you fall, pick yourself up! Greatness is just a swim away.

Questions to ask ourselves. Do you give up easily? Do you submit to fate easily? Are you discouraged easily? Is the picture of the glass of water below, half-empty or half-full to you? 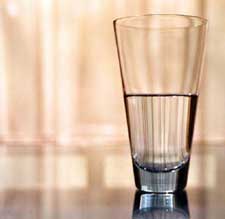