If there was to be a must-watch movie for the month of May, Ip Man 2 is one of them. Ip Man 2 takes place after Ip Man (叶问) escaped from Foshan, China to the British Colony; Hong Kong where he tries to spread ‘Wing Chun’, a Chinese Martial Arts fighting style in the region.

The film is a sequel to the movie Ip Man and is loosely based on the true story. Ip Man 2 is starred by some of Hong Kong’s highly reputable and veteran actors such as Donnie Yen (as Ip Man) and Sammo Hung (as Hung Jan Nam).

Director Wilson Yip wanted to highlight certain issues from Ip Man 2 such as the prejudices of the British who calls the shots against the Chinese who were deemed the ‘weaker’ race, the British’s perception of Chinese Martial Arts and the struggles of living under colonial rule in Hong Kong. But the film also highlights the strengths and unity of the Chinese as well as their ancient Martial Arts. 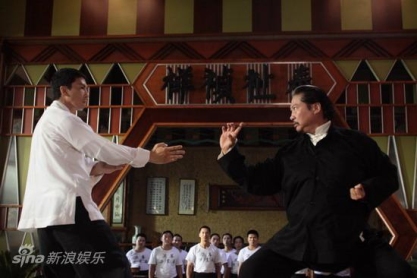 Some exciting moments include the fight between Ip Man and Hung Jan Nam. Movie-goers will be amazed by the action scenes as well as the volley of punches executed by the martial arts masters. While some of the moves might seem a little repetitive from the last film, this film promises to put all viewers at the edge of their seat – be it whether they have watched the prequel or not.

Ip Man 2 has comical scenes, awesome fighting scenes, moral values and touching moments all rolled into one movie. More than that, Ip Man 2 highlights the importance of having dignity, pride and fighting for a purpose (unlike many movies which depicts mindless fighting). This film takes chinese martial arts movie to a whole new level, and it is better than Fearless (霍元甲) in my opinion.

If you’re a Chinese, you would definitely feel proud to be one after this movie!

Word has it that there might be a sequel to the movie focusing on Ip Man’s disciple Bruce Lee, and Jay Chou is considered for the role. Whatever that may be, I sure hope that it does not disappoint!

Though many movie critics slam the movie for various reasons, I personally feel that this movie struck all the right chords in a viewer’s minds (in mine at least), making this movie a 5 star film. Ip Man 2 will continue to be the talking point of the movie-goers even when the movie is long over. Go watch it if you haven’t really have! You have to see it to believe it!